Skip to content
Home - What If?…The Implications of Jesus’ Time in India 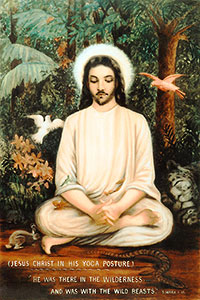 This is Part 1 of a guest article by Paul van Oyen of the Netherlands, who has done extensive research into the sojourn of Jesus in India. The full text of “What If” can be found here.

If we take Jesus’ sojourn in India and Tibet as a conceivable basis for our view on Christianity, the question arises: what is its significance for us today? In my opinion in means in the first place that Christianity should at once lay off its attitude of claiming exclusive rights to enlightenment and redemption through Jesus Christ only.In India/Tibet Jesus–as Issa–perfected his knowledge about the universal Oneness and the dreamlike state of the world we live in. He became an enlightened one or a realised soul. Going back to the roots of this ancient knowledge and to the tradition of Oneness would be sound advice for us today. The ancient knowledge is still available as living knowledge in–sometimes remote–centres of learning in India and in the Himalayas. If Christians could be persuaded to accept the unity and universality of the religious traditions it would have a great healing effect on both the religious and spiritual traditions in the world at large. There is a growing awareness that each religion has its own raison d’être and has its own role to play within the context of its tradition and following. This awareness could be easily intensified and Christians in particular have an important function to play since their tradition is based on universal love and mutual respect. There are many roads to the Kingdom within and the function of the various religions is to suit the tastes of those who adhere to the one or the other. Conversion and missionary activities should be transformed into operations of charity and compassion without any strings attached. It is almost a universal rule that we should respect and honour our parents and the elders. If Christianity is based on the ancient tradition of advaita vedânta it is high time to acknowledge this and come to terms with that tradition as the source of the Christian message. Paying our respects to and honour the ancient masters would benefit all of us. Much research should be undertaken to re-inspire the Christian message and to work for unity rather that division.

What if Jesus really went to India and studied there for 18 years? The information about his sojourn in India for almost 18 years is already convincing on the basis of circumstantial evidence: there are too many parallels to be found in his sayings and in those of Krishna and the Buddha. Moreover, many of his ‘I am’ sayings in St John’s gospel are completely in line with the advaita tradition of the Upanishads. It seems that his saying: I and the Father are one has been taken directly from one of the four great sayings of the Vedânta tradition: ayamâtma brahma (this personal self is absolute and universal). The silence of the New Testament on his whereabouts during those 18 years (between the age of twelve and thirty) is in a way surprising. Unless another source of information comes up, the content of the Tibetan manuscript of the Gospel of Issa combined with the information from living Indian masters in the oral tradition provide serious and in a way conclusive evidence of Jesus’ studies and sojourn in India and in Nepal/Tibet. In the light of the positive evidence as available anyone denying Jesus’ study in India should come up with sufficient proof to the contrary. Just saying that ‘it is not written in the Bible’ is no more than a negative remark that doesn’t prove anything.

It is really sad to note that through dogmas and by exerting all kinds of–sometimes illegal–pressure the church has been able to maintain a strange concoction of manipulated information. It almost seems as if the church would like to picture Jesus as a loser who became a winner thanks to the incessant efforts of the church to polish up his image and clean it of any worldly weaknesses. It seems highly unlikely for a man who in every possible way gave proof of being the master of any situation. It is really sad that this manipulative attitude of the established churches is still around us and that the doors of the Vatican Library, a storehouse of precious manuscripts and information, remains closed to the objective researcher. The same would apply to the valuable libraries in the East within the scope of the Orthodox churches. There is an almost cynical co-operation between the Eastern and Western Christian established churches on this sensitive issue of not revealing the true sources of information and hiding behind dogma.

The fact is that in today´s world the figure of Jesus Christ is hardly appealing to the new generations of young people. In a way one should already be happy if young people ask if Jesus Christ refers perhaps to the star role in the Jesus Christ Superstar musical of Andrew Lloyd Webber. Jesus Christ was certainly a ‘superstar’ but in an entirely different context. Pontius Pilate had the same predicament since he refused to understand that the very example of true kingship is being Master of the three worlds (physical, subtle and causal). Jesus was such a true master which has been a very rare event in Western history. Only Socrates seems to come anywhere near to him. Pontius Pilate is a exponent of the modern politician and of modern government with its thirst for power and holding on to it in the conviction that the there is nothing beyond the physical world. Only the physical world is true, as most people would confirm even today. For Pontius Pilate Jesus was just another pretender-king for the throne of Israel and was, therefore, guilty of high treason against the Roman occupying forces. There is precious little new in the world we live in today in comparison with two thousand years ago. We still hang on with all our power to our bodily existence in a physical world even when we know that bodies just come and go and are enlivened by consciousness and the life force of the universe. We rather reverse the picture and try to prove that our mental and spiritual activities emanate from the interaction of hormones in the body and in the brain. It is totally contrary to reason.

Paul van Oyen has done extensive research into the “Lost Years” of Jesus, and has done a translation of Nicholas Notovitch’s Unknown Life of Christ. His work can be found at his Dutch website, The Gospel of Issa.